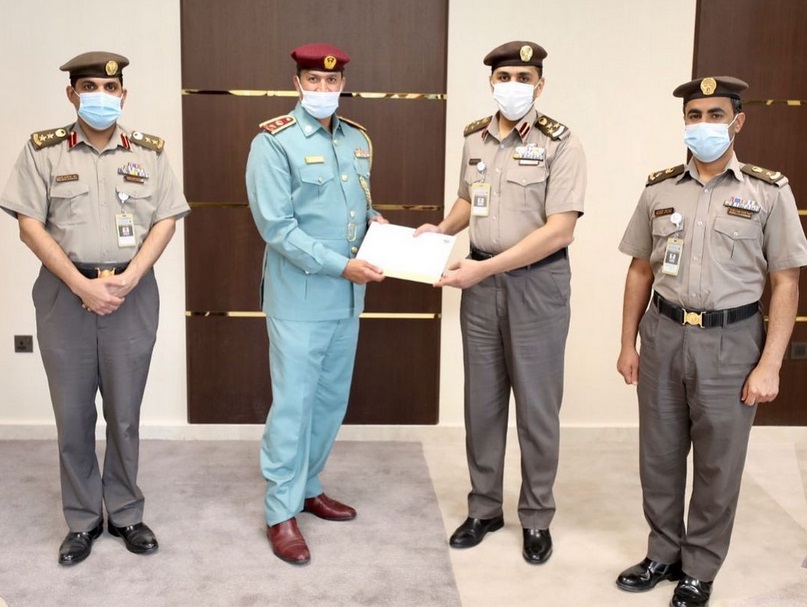 To complement the joint cooperation efforts between the Punitive and Correctional Institution and the Federal Authority for Identity and Citizenship in Umm Al Quwain, a delegation headed by Lt. Col. Dr. Saif Salem Zaid, Director of the Punitive and Correctional Institution Department, visited the Federal Authority for Identity and Citizenship building, and they were received by Lt. Col. Hamid Fayez Al Shamsi, Director of Violators and Foreigners Affairs Department. A meeting was held during which various aspects of cooperation were discussed in order to serve the common goals. Lt. Col. Dr. Seif indicated that these visits contribute to overcoming the problems arising from the performance of tasks and increase the bonds of cooperation and job excellence. After completing the meeting, the delegation toured the authority’s building, and concluded the tour by heading to the office of His Excellency Brigadier General Khaled Youssef Muhammad bin Hudayba, Executive Director of Residency and Foreigners Affairs in Umm Al Quwain, who in turn honored the penal and correctional institution, wishing them further progress and success.